Jamie Foxx is 'Sleepless' on Blu-ray

The action-packed thriller is set to arrive on home video in April.

In an early announcement to retailers, Universal Studios is working on 'Sleepless' for Blu-ray on April 18.

Undercover police officer Vincent Downs (Jamie Foxx) thrives in the high stakes web of corrupt cops and the mob-controlled casino underground of Las Vegas. But when a heist goes wrong and a crew of homicidal gangsters kidnaps Downs' teenage son, he must evade an internal affairs investigation, rescue his son, and bring the kidnappers to justice all in one sleepless, pulse-pounding night.

The Blu-ray combo pack will feature 1080p, lossless audio, and supplements include a making-of featurette and deleted scenes.

You can find the latest specs for 'Sleepless' linked from our Blu-ray Release Schedule, where it is indexed under April 18. 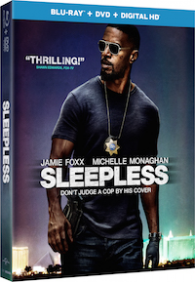