The story of Stephen and Jane Hawking is planned for Blu-ray in February.

In an early announcement to retailers, Universal Studios will be releasing 'The Theory of Everything' on Blu-ray on February 17.

Based on Jane Hawking's memoir Travelling to Infinity: My Life with Stephen and directed by Academy Award winner James Marsh ('Man on Wire'), the acclaimed film is an unforgettable portrait of a singular marriage and the two exceptional souls who built it. 'The Theory of Everything' is nominated for five Academy Awards including Best Picture, Best Actor, Best Actress, and Best Adapted Screenplay (screenwriter, Anthony McCarten).

Set to the music of Jóhann Jóhannsson, Academy Award nominee and Golden Globe Award® winner for Best Original Score, 'The Theory of Everything' stars Academy Award® nominee and Golden Globe Award winner Eddie Redmayne and Academy Award® nominee Felicity Jones. The duo have dazzled critics and audiences alike with their stunning portrayals of one of the world's greatest living minds and the woman who persevered for love. Once a healthy, active young man, Hawking receives an earth-shattering diagnosis at 21 years of age. With Jane fighting tirelessly by his side, Stephen embarks on his most ambitious scientific work, studying the very thing he now has precious little of—time. Together, they defy impossible odds, breaking new ground in medicine and science, and achieving more than they could ever have dreamed.

You can find the latest specs for 'The Theory of Everything' linked from our Blu-ray Release Schedule, where it is indexed under February 17. 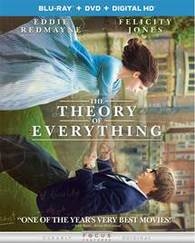