The fantasy film is coming to Blu-ray in March.

In an early announcement to retailers, Universal is preparing 'A Monster Calls' for Blu-ray on March 28.

12-year-old Conor O’Malley’s (Lewis MacDougall) life has taken a dark turn. His mother (Felicity Jones) has taken ill; he now lives with his grandmother (Sigourney Weaver), who is less than sympathetic; and he is tortured by bullies at school. The only thing Conor can turn to is his artwork, which creates a world for him to escape. Late at night, Conor unexpectedly conjures a 40-foot-high monster (voiced by Liam Neeson), who comes every evening to tell him stories. It is through these stories that Conor learns to see the world in a completely different way in this visually-spectacular film from director J.A. Bayona.

You can find the latest specs for 'A Monster Calls' linked from our Blu-ray Release Schedule, where it's indexed under March 28. 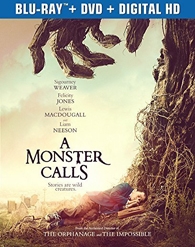 Discs mentioned in this article: (Click for specs and reviews)
A Monster Calls (Blu-ray)