In an early announcement to retailers, Universal says 'My Old Lady' will be released on Blu-ray on January 27.

Mathias (Kevin Kline) is a down-and-out New Yorker who travels to Paris to liquidate a huge, valuable apartment he has inherited from his estranged father. Once there, however, he discovers a refined old woman Mathilde (Maggie Smith) living in the apartment with her daughter Chloé (Kristin Scott Thomas). Mathias quickly learns that the apartment is a "viager" – an ancient French system for buying and selling apartments – and that he will not actually get possession of the apartment until Mathilde dies. While working with a Parisian real-estate dealer (Dominique Pinon), to sell his contract for the apartment, Mathias discovers that Mathilde and his father were lovers for more than 50 years.

The Blu-ray/Ultraviolet combo pack will feature 1080p video, a lossless 5.1 soundtrack, and the only supplement will be 92nd Street Y Annette Insdorf Interview with Kevin Kline and Israel Horovitz.

You can find the latest specs for 'My Old Lady' linked from our Blu-ray Release Schedule, where it is indexed under January 27. 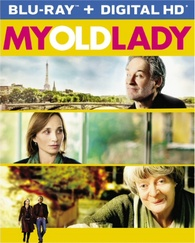