The utterly insane action flick is now up for Blu-ray pre-orders at Amazon.

In an early announcement to retailers, Universal will be releasing 'Hardcore Henry' on Blu-ray later this year.

Hardcore - The First Ever Action POV Feature Film. Henry, a newly resurrected cyborg who must save his wife/creator Estelle from the clutches of a psychotic tyrant with telekinetic powers, Akan, and his army of mercenaries. Fighting alongside Henry is Jimmy, who is Henry's only hope to make it through the day. Hardcore takes place over the course of one day, in Moscow, Russia.

You can find the latest specs for 'Hardcore Henry' linked from our Blu-ray Release Schedule, where it is indexed under PENDING. 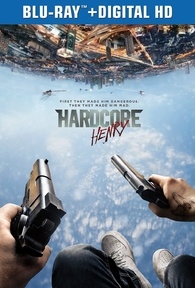