'I Am Ali' to Knock out Blu-ray in November

Clare Lewins' documentary on the greatest fighter of all time will clobber Blu-ray in November. Pre-orders are available now.

In an early announcement to retailers, Universal Studios will be releasing 'I Am Ali' on Blu-ray on November 11.

'I Am Ali' is an intimate and heartwarming look at the legendary athlete, beloved father, humanitarian, and activist as he has never been seen before. With exclusive access to Ali's personal archive of "audio journals," 'I Am Ali' features touching interviews and testimonials from his inner circle of family and friends, legends of the boxing community—including former heavyweight champions Mike Tyson and George Foreman—and Ali's longtime friend and business manager, Gene Kilroy. The film shares the champion's extraordinary history as a fighter, lover, brother, father, and friend as told by insiders and by the man himself for the very first time.

From the executive producer of the Academy Award®-winning documentary Searching for Sugar Man, 'I Am Ali' also features a stellar soundtrack with classic songs from the ’60s and ’70s, including hits by Stevie Wonder, Jimi Hendrix, Aretha Franklin, and many more.

You can find the latest specs for 'I Am Ali' linked from our Blu-ray Release Schedule, where it is indexed under November 11. 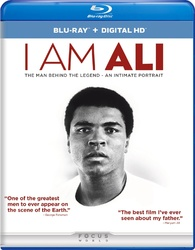