Eight horror classics from Hammer will be getting the Blu-ray treatment in September.

In an early announcement to retailers, Universal will be bringing 'Hammer Horror Series 8-Film Collection' to Blu-ray on September 13.

Hammer Films, one of the most celebrated horror studios in the history of cinema, presents 8 classic horror films in one collection. From Dracula to Frankenstein, werewolves to phantoms, the Hammer Horror Series 8-Film Collection showcases some of the most terrifying monsters in the history of cinema and features legendary performances by Peter Cushing, Oliver Reed and Janette Scott.

The box set includes Brides of Dracula, The Curse of the Werewolf, Phantom of the Opera, Paranoiac, Kiss of the Vampire, Nightmare, Night Creatures, and The Evil of Frankenstein.

Specs and supplements haven't been revealed yet, but the suggested list price for the Blu-ray is $59.98.

You can find the latest specs for 'Hammer Horror Series 8-Film Collection' linked from our Blu-ray Release Schedule, where it is indexed under September 13. 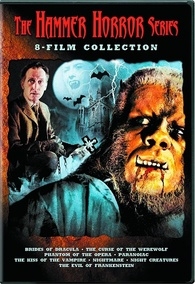