The fantasy show's final season will arrive on Blu-ray in June.

In an early announcement to retailers, Universal is preparing Grimm: Season Six for Blu-ray on June 13. In addition, a Grimm: The Complete Collection box set will also be available that same day.

Now that the nefarious forces of Black Claw have been silenced, Nick (David Giuntoli) faces an all too familiar foe in Captain Sean Renard (Sasha Roiz). Having gained a seat of power as the mayor-elect of Portland, Renard is poised to bring rise to his own brand of law and order. Nick must take a stand to protect his city and those closest to him, especially his child with Adalind (Claire Coffee). It will take the full force of Nick and his allies to find a way to bring peace. Meanwhile, Monroe (Silas Weir Mitchell) and Rosalee (Bree Turner) grapple with bringing a child into a new and tumultuous world, and Eve (Bitsie Tulloch) faces unsettling identity issues as her former self lurks below the surface. Own all 13 spine-chilling episodes of the final season of Grimm.

The Blu-ray will feature 1080p video, a DTS-HD MA soundtrack, and supplements will include:

You can find the latest specs for Grimm: Season Six and Grimm: The Complete Collection linked from our Blu-ray Release Schedule, where they are indexed under June 13. 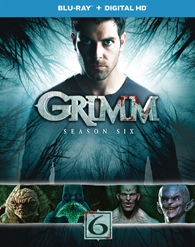 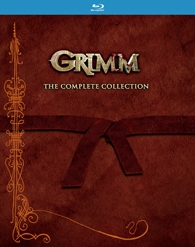