The fifth season of the fantasy crime series is headed for Blu-ray in September.

In an early announcement to retailers, Universal will be releasing 'Grimm: Season Five' on Blu-ray on September 27.

At the heels of his mother's beheading and Juliette's "death," Nick's life has taken a turn he never expected. Having lost so much, Nick must now come to grips with fathering a child with his once sworn enemy, Adalind. With even more dangerous Wesen coming out of the shadows, the Black Claw uprising Team Grimm has been dreading is approaching in full force. Own all 22 episodes of Grimm: Season Five, the most chilling season of Grimm yet.

The Blu-ray will feature 1080p video, a lossless 5.1 soundtrack, and supplements include: Deleted Scenes; Gag Reel; A Grimm New World; Unlocking the Mystery: Inside the 100th Episode; Fome Tour; and the Blu-ray exclusive Grimm Guide.

You can find the latest specs for 'Grimm: Season Five' linked from our Blu-ray Release Schedule, where it is indexed under September 27. 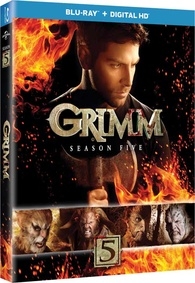