The horror flick starring Kevin Bacon and Radha Mitchell is planned for a September for a release.

In an early announcement to retailers, Universal will be releasing 'The Darkness' on Blu-ray on September 6.

From the producers of The Purge and Insidious, comes this terrifying supernatural thriller starring Kevin Bacon (TV's The Following) and Radha Mitchell (Silent Hill). When their young son (David Mazouz, TV's Gotham) brings home five mystical stones he found on their family's camping trip to the Grand Canyon, Peter (Bacon) and Bronny (Mitchell) begin to notice strange things happening in their house. Having awakened dark forces bound to the rocks, the family fights for survival as malicious demons feed off their fears and threaten to destroy them.

Specs have yet to be revealed, but supplements include deleted scenes and an alternate ending.

You can find the latest specs for 'The Darkness' linked from our Blu-ray Release Schedule, where it is indexed under September 6. 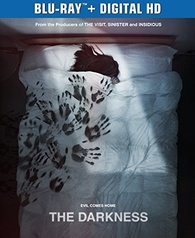