The comedy starring Jennifer Aniston, Kate Hudson, and Julia Roberts will arrive on Blu-ray in August.

In an early announcement to retailers, Universal is preparing 'Mother's Day' for Blu-ray on August 2.

From Garry Marshall, the director of Pretty Woman and Valentine’s Day, comes 'Mother's Day,' an all-star comedy that celebrates parenthood and family.  The star-studded ensemble film follows three separate-but-connected families and explores the many types of relationships among children and their mothers.  It’s a comedy that will make you laugh, cry and cheer! Also starring Shay Mitchell (“Pretty Little Liars”), Timothy Olyphant (“Justified,” Live Free or Die Hard), Britt Robertson (Tomorrowland, The Longest Ride) and Hector Elizondo (Pretty Woman, The Princess Diaries), 'Mother's Day' tells a fun and relatable story that can be enjoyed by all generations, making it the perfect family night movie!


The Blu-ray will feature 1080p video, a DTS-HD MA 5.1 soundtrack, and supplements will include: Deleted Scenes with introductions by Garry Marshall and Gag Reel.

You can find the latest specs for 'Mother's Day' linked from our Blu-ray Release Schedule, where it's indexed under August 2. 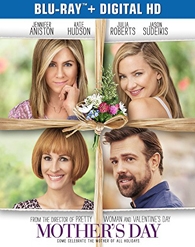 Discs mentioned in this article: (Click for specs and reviews)
Mother's Day (2016) (Blu-ray)