The crime drama starring Michael Shannon and Imogen Poots is heading to Blu-ray in February.

In an early announcement to retailers, Universal is preparing 'Frank & Lola' for Blu-ray on February 7.

A seductive and intense noir romance for our times, Frank & Lola is the story of two people locked in a battle of passion and obsession. When talented chef Frank meets aspiring fashion designer Lola, he is instantly and violently in love. As the secrets of Lola's dark past are revealed, the lovers are drawn into a web of sex, jealousy and revenge. With outstanding performances from Michael Shannon and Imogen Poots, Frank & Lola is a haunting examination of love, obsession and domination that weaves a twisted yet irresistible spell.

You can find the latest specs for 'Frank & Lola' linked from our Blu-ray Release Schedule, where it's indexed under February 7. 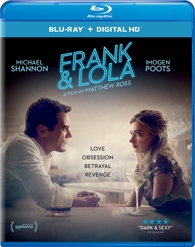 Discs mentioned in this article: (Click for specs and reviews)
Frank & Lola (Blu-ray)