The critically-acclaimed film heads to Blu-ray in January.

In an early announcement to retailers, Universal says 'Straight Outta Compton' on Blu-ray on January 19.

With an 89% certified fresh rating on Rotten Tomatoes and hailed by critics as, "an electrifying piece of hip-hop history that speaks urgently to right now," (Peter Travers, Rolling Stone), Straight Outta Compton bowed as the box office's biggest R-rated August opening of all time and biggest musical biopic ever, grossing $60 million during its opening weekend and generating over $200 million worldwide to date.

The Blu-ray combo pack will feature 1080p video, lossless 5.1 audio, and supplements include: N.W.A. The Origins: N.W.A. was a group that changed history. Dr. Dre, Ice Cube, DJ Yella, and many others talk about their start in the 80's and where it all began; Impact: An exploration of the impact N.W.A. and specifically their breakout album that changed everything; Director's Journey: Utilizing a large amount of stand up interviews, we follow F. Gary Gray through the streets of Compton as he brings together the story of the founders of gangsta rap; The Streets - Filming in Compton: Take a look through the lens of Director F. Gary Gray as he perfected the authentic feeling of what it was like to walk the streets of Compton; N.W.A Performs in Detroit: We go behind the scenes of what this performance meant to the original members of N.W.A. as they saw their lyrics spark controversy against the corruption of the police in Los Angeles, as well as the thoughts of the actors performing the song on stage for the movie; and Feature Commentary with director/producer F. Gary Gray.

Blu-ray exclusives include: Deleted Scenes; Becoming N.W.A.: An in-depth look at how the producers and F. Gary Gray tackled the challenging task of casting these larger than life creators of gangster rap; and Never Before Seen Performance.

You can find the latest specs for 'Straight Outta Compton' linked from our Blu-ray Release Schedule, where it is indexed under January 19. 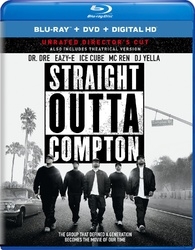