The action-thriller starring Nicholas Hoult, Felicity Jones, Ben Kingsley, and Anthony Hopkins will be available on Blu-ray in May.

In an early announcement to retailers, Universal Studios is working on 'Collide' for Blu-ray on May 30.

Needing some fast cash to save the love of this life Juliette (Felicity Jones), Casey Stein (Nicholas Hoult) returns to his former employer and drug smuggler Geran (Ben Kingsley) for one last job – which goes horribly wrong. Now on the run from ruthless mob boss Hagen (Anthony Hopkins), Casey sets out on an adrenaline-fueled car chase on the German highways to get to Juliette before it's too late. Filled with twists and turns, Collide is a high-speed action-packed thrill ride from start to finish.

You can find the latest specs for 'Collide' linked from our Blu-ray Release Schedule, where it is indexed under May 30. 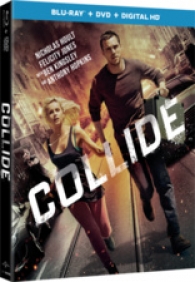