The action thriller starring Scott Adkins is headed for Blu-ray this December.

In an early announcement to retailers, Universal is working on 'Midnight in the Garden of Good and Evil' for Blu-ray on December 6.

When his home in London is attacked, a former federal agent (Scott Adkins, Doctor Strange) must come out of hiding of the witness protection program to protect his daughter. With his true identity exposed to the criminal underworld, he goes on the run with Europe's most dangerous assassin on his trail and must use every trick he knows to keep his family alive. Also starring Wade Barrett, Eliminators is a fast-paced, edge-of-your-seat thrill ride.

The release will feature 1080p video, lossless 5.1 audio, and supplements include: Hand-to-Hand Bishop and Bishop for Hire.

You can find the latest specs for 'Eliminators' linked from our Blu-ray Release Schedule, where it is indexed under December 6. 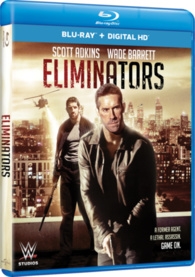