The cannibalistic horror flick will devour Blu-ray early next year.

In an early announcement to retailers, Universal will be releasing 'The Green Inferno' on Blu-ray on January 5.

New York college student Justine (Lorenza Izzo), a lawyer's daughter, meets a student activist named Alejandro (Ariel Levy) when he goes on a hunger strike on behalf of underpaid janitors. Smitten, Justine agrees to help Alejandro undertake his next project: to save the Amazon. She soon learns to regret her decision when their plane crashes in the Peruvian jungle and she and the rest of their group are taken captive by a tribe of hungry cannibals.

You can find the latest specs for 'The Green Inferno' linked from our Blu-ray Release Schedule, where it is indexed under January 5. 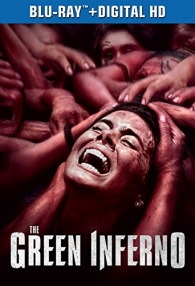