Three film classics are headed for Blu-ray in April.

In an early announcement to retailers, Universal says 'Doris Day and Rock Hudson Romantic Comedy Collection' will be available on Blu-ray on April 19.

Pillow Talk -- Rock Hudson and Doris Day, two of the screen's most popular and enduring stars, are together for the very first time!

When Jan Marrow (Day), uptight interior decorator, is to share a party line with an carefree playboy Brad Allen (Hudson), there's no connection between them. But when the two accidentally meet, the smitten Brad pretends to be a wealthy Texan, wooing Jan with seductive late-night calls. Their phone line is sizzling until Jan discovers her caller's true identity and calls his bluff. Winner of an Academy Award for Best Original Screenplay, this delicious romp co-stars Tony Randall and Thelma Ritter.

Lover Come Back -- Rock Hudson and Doris Day are together again! Jerry Webster (Hudson) and Carol Templeton (Day) are rival Madison Avenue advertising executives who each dislike each other's methods. After he steals a client out from under her cute little nose, revenge prompts her to infiltrate his secret "VIP" campaign in order to persuade the mystery product's scientist to switch to her firm. Trouble is, the product is phony and the "scientist" is Jerry, who uses all his intelligence and charm to steal her heart in this outrageous comedy of mistaken identity, co-starring the ever-delightful Tony Randall.

When he overhears a doctor discussing the imminent death of a patient, hypochondriac George (Hudson) believes the doc is referring to him. Convinced he's living on borrowed time, George enlists the aid of his best friend Arnold (Randall) to find a new husband for his soon-to-be-widowed wife Judy (Day). Already alarmed by her husband's increasingly strange behavior, Judy is even more bewildered when an old flame shows up - and George bends over backwards to encourage his advances!

The third and final on-screen teaming of Rock Hudson and Doris Day, Send Me No Flowers positively sparkles with "top performers...in top form" (The Hollywood Reporter).

Specs and supplements haven't been revealed yet, but the suggested list price for the Blu-ray is $35.98.

You can find the latest specs for 'Doris Day and Rock Hudson Romantic Comedy Collection' linked from our Blu-ray Release Schedule, where it is indexed under April 19. 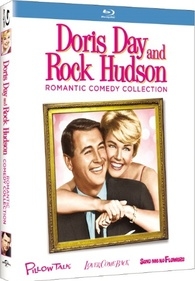