The comedy will be available on Blu-ray in December.

In an early announcement to retailers, Universal says 'Don't Think Twice' will be available on Blu-ray on December 6.

For 11 years, the six-person comedy team known as The Commune has killed onstage, waiting for its big break. The team finds itself at a crossroads, when one of the group becomes a solo success and the others start to wonder if they will make it after all.

The combo pack will feature 1080p video, lossless 5.1 audio, and supplements include: Improv: Deleted Scenes; The Creative Team; Don't Think Twice: The Art of Improv; and The Commune.

You can find the latest specs for 'Don't Think Twice' linked from our Blu-ray Release Schedule, where it is indexed under December 6. 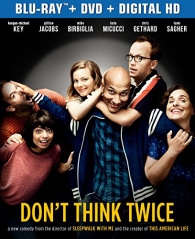