The suspense-thriller starring Gael García Bernal and Jeffrey Dean Morgan is headed for Blu-ray in February.

In an early announcement to retailers, Universal is prepping 'Desierto' for Blu-ray on February 7.

From Jonás Cuarón and Alfonso Cuarón, the acclaimed filmmakers of Gravity, comes the modern, heart-pounding suspense-thriller starring Golden Globe winner Gael García Bernal (Mozart in the Jungle, Y Tu Mamá También) and Jeffrey Dean Morgan (The Walking Dead, Watchmen). What begins as a hopeful journey to seek a better life becomes a harrowing and primal fight for survival when a deranged, rifle-toting vigilante chases a group of unarmed men and women through the treacherous U.S.-Mexican border. In the harsh, unforgiving desert terrain, the odds are stacked firmly against them as they continuously discover there's nowhere to hide from the unrelenting, merciless killer.

Specs have yet to be revealed, but supplements include a Feature Commentary with Director Jonás Cuarón.

You can find the latest specs for 'Desierto' linked from our Blu-ray Release Schedule, where it is indexed under February 7. 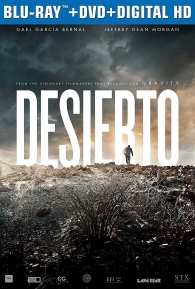