Director Mick Jackson's drama is coming to Blu-ray in January.

In an early announcement to retailers, Universal is preparing 'Denial' for Blu-ray on January 3.

Oscar winner Rachel Weisz stars in this powerful true story based on the acclaimed book, Denial: Holocaust History on Trial. When Deborah Lipstadt (Weisz) speaks out against Holocaust denier David Irving (Timothy Spall) over his falsification of history, she discovers that the stakes are higher than ever in the battle for historical truth. Now faced with a libel lawsuit in British court, Lipstadt and her attorney (Tom Wilkinson) have the heavy burden of proving that the Holocaust actually happened, in a riveting legal fight with stunning consequences.

- The Making of Denial
- Theatrical Trailer

You can find the latest specs for 'Denial' linked from our Blu-ray Release Schedule, where it's indexed under January 3. 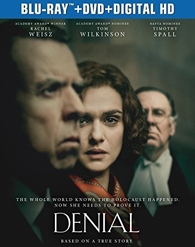 Discs mentioned in this article: (Click for specs and reviews)
Denial (Blu-ray)