The 2007 horror will have its Blu-ray debut in August.

In an early announcement to retailers, Universal is set to release 'Dead Silence' on Blu-ray on August 11.

Dare to unlock the deadly curse of Mary Shaw...From the writers and director of Saw comes a new thriller of relentless terror! Ever since Mary Shaw was hunted down and killed, the small town of Ravens Fair has been haunted by horrific deaths. When a local's wife is brutally murdered, he returns home to unravel the terrifying legend of Mary Shaw and the reason why when you see her, you should never, ever scream.

The Blu-ray will feature 1080p video, a lossless 5.1 soundtrack, and supplements include: Alternate Opening/Endings, Deleted Scenes, The Making of Dead Silence, Mary Shaw's Secrets, Evolution of a Visual FX, and Aiden's "We Sleep Forever" Music Video.

You can find the latest specs for 'Dead Silence' linked from our Blu-ray Release Schedule, where it is indexed under August 11. 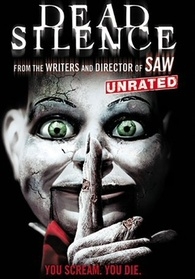