In an early announcement to retailers, Universal Studios will be releasing 'Danny Collins' on Blu-ray on June 30.

Pacino stars as aging 1970s rocker Danny Collins, who can't give up his hard-living ways. But when his manager (Christopher Plummer) uncovers a 40-year-old undelivered letter written to him by John Lennon, he decides to change course and embarks on a heartfelt journey to rediscover his family, find true love and begin a second act.

The Blu-ray/DVD/Digital Copy combo pack will feature 1080p video, lossless 5.1 audio, and supplements include: Behind the Scenes of Danny Collins and Danny Collins - Album Covers Through the Years.

You can find the latest specs for 'Danny Collins' linked from our Blu-ray Release Schedule, where it is indexed under June 30. 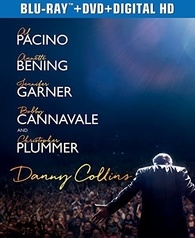