The comedy will be available on Blu-ray this May.

In an early announcement to retailers, Universal Studios is working on 'The Resurrection of Gavin Stone' for Blu-ray on May 2.

Former child star Gavin Stone (Brett Dalton) must perform 200 hours of community service after trashing a hotel in his Illinois hometown. Temptation strikes when Stone learns that the church he's assigned to clean is staging a lavish religious production. After landing the lead role of Jesus Christ, Gavin finds himself drawn to the show's director (Anjelah Johnson-Reyes), a young woman who also happens to be the daughter of the affable pastor (D.B. Sweeney).

Specs have yet to be revealed, but supplements include: Deleted Scenes; Church Uniform Advice - Featurette; and Cast Interviews with James MacDonald.

You can find the latest specs for 'The Resurrection of Gavin Stone' linked from our Blu-ray Release Schedule, where it is indexed under May 2. 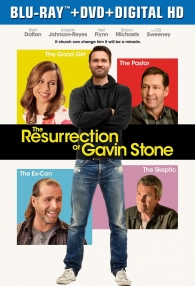