The third season of the time travel series will hit Blu-ray in December, and pre-orders are now live.

In an early announcement to retailers, Universal is preparing ''Continuum: Season Three' for Blu-ray on December 23.

As the third season opens, Alec (Erik Knudsen) travels back in time to prevent Emily's death. Kiera (Rachel Nichols) must follow to prevent Alec from altering history in a way that could end her chances of returning home forever. But Alec quickly sets in motion ripples that affect everyone around him - including this new timeline's already-resident Alec. Kiera arrives just in time to discover "her" Alec - now sporting a nasty scar. He's standing over another Kiera. A dead Kiera. "Scar" Alec has some explaining to do.

You can find the latest specs for ''Continuum: Season Three' linked from our Blu-ray Release Schedule, where it's indexed under December 23. 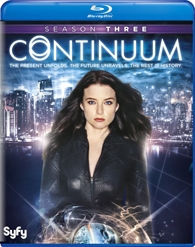