The final season of the Syfy series is planned for a January Blu-ray release.

In an early announcement to retailers, Universal is working on 'Continuum: Season Four' to be released on Blu-ray on January 19.

In season four of Continuum, Kiera Cameron (Rachel Nichols, Criminal Minds, Alias) and the mysterious time traveler, Brad Tonkin (Ryan Robbins, Falling Skies, The Killing) must battle the Future Soldiers who arrived in a flash of light in the last moments of season three. Meanwhile, Kiera's alliance with the remaining members of Liber8 challenges her relationship with both Carlos (Victor Webster, Castle, Melrose Place) and Alec Sadler (Erik Knudsen, Jericho, Scream 4). Kiera must also face off against Kellog (Stephen Lobo, Arctic Air, Smallville), who is using every option available to him to become the ruler of a dark future built in his image. Ultimately Kiera is put to the test when the dream of potentially reuniting with her family is reignited.

You can find the latest specs for 'Continuum: Season Four' linked from our Blu-ray Release Schedule, where it is indexed under January 19. 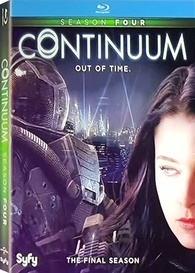