The legendary Nirvana frontman is the focus of this documentary hitting Blu-ray in November. Pre-orders are now available.

In an early announcement to retailers, Universal is preparing 'Kurt Cobain: Montage of Heck' for Blu-ray on November 6.

From acclaimed director Brett Morgen, this first ever, fully authorised documentary feature blends Cobain's personal archive of art, written word, music (both his most famous and some that's never been heard), and never –before-seen home movies, with animation and revelatory interviews from his family and closest confidantes. Following Kurt from his earliest years in Aberdeen, WA, through the height of his fame, it creates an intense and powerful cinematic insight into an artist who craved the spotlight even as he rejected the trappings of fame. Those of Kurt's generation will learn things about him they never knew. Those who've discovered the man and his music more recently will understand what makes Kurt the lasting icon that he is. Just like the legendary frontman of Nirvana himself, Cobain: Montage of Heck is authentic, visceral and unflinching. It will get into your head and stay there long after the end credits roll.

You can find the latest specs for 'Kurt Cobain: Montage of Heck' linked from our Blu-ray Release Schedule, where it's indexed under November 6. 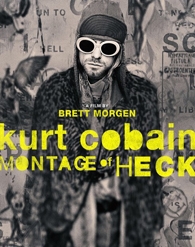 Discs mentioned in this article: (Click for specs and reviews)
Kurt Cobain: Montage of Heck (Blu-ray)