In an early announcement to retailers, Universal Studios will be releasing 'I'll See You In My Dreams' on Blu-ray on September 1.

A sudden loss disrupts Carol's (Blythe Danner) orderly life, propelling her into the dating world for the first time in 20 years. Finally living in the present tense, she finds herself swept up in not one but two unexpected relationships that challenge her assumptions about what it means to grow old.

The combo pack will feature 1080p video, a lossless 5.1 soundtrack, and supplements include A Look Inside I'll See You in My Dreams featurette.

You can find the latest specs for 'I'll See You In My Dreams' linked from our Blu-ray Release Schedule, where it is indexed under September 1. 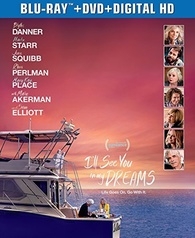