'Boy & the World' Dated and Detailed for Blu-ray

The acclaimed animated adventure will make its Blu-ray debut in July.

In an early announcement to retailers, Universal will be releasing 'Boy & the World' on Blu-ray on July 5.

Brazilian artist Alê Abreu's Academy Award-nominated masterpiece is a riotous explosion of music and color that critics proclaim is "one of the most beautiful animated features ever made." (David Noh, Film Journal International) Cuca's cozy rural life is shattered when his father leaves for the city. Determined to reunite his family, Cuca embarks on a journey that unfolds like a tapestry – the film's stunning visuals becoming more complex as his small world expands. The story of a changing world through the eyes of a curious child, Boy and the World depicts a clash between village and city, nature and industry, the rich and the poor – and despite the tumult, the heart and soul of the people beats on as a song.

You can find the latest specs for 'Boy & the World' linked from our Blu-ray Release Schedule, where it is indexed under July 5. 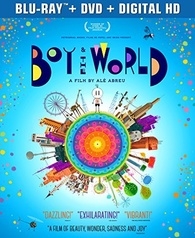