The komedi seequal staring Jim Carrey and Jeff Daniels is pland for Bloo-ray in Febrooary.

In an early announcement to retailers, Universal will be releasing 'Dumb and Dumber To' on Blu-ray on February 17.

Jim Carrey and Jeff Daniels reprise their signature roles as Lloyd and Harry in the sequel to the smash hit that took the physical comedy and kicked it in the nuts: Dumb and Dumber To. The original film's directors, Peter and Bobby Farrelly, take Lloyd and Harry on a road trip to find a child Harry never knew he had and the responsibility neither should ever, ever be given.

The Blu-ray/DVD/Digital Copy combo pack will feature 1080p video, a lossless 5.1 soundtrack, and supplements include: That's Awesome! – The Story Of Dumb And Dumber To; with Blu-ray exclusives being Alternate Opening and Deleted/Extended Scenes; Gag Reel; and What's so Smart about Dumb and Dumber To? From stress relief to providing a new perspective on life, the film's cast and crew and the author of Psychology for Dummies make the case for why you sometimes need to step back from the seriousness of life and just get dumb.

You can find the latest specs for 'Dumb and Dumber To' linked from our Blu-ray Release Schedule, where it is indexed under February 17. 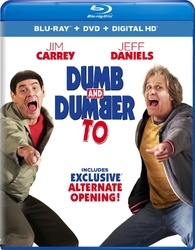