Blu-ray Will 'Rock the Kasbah' with Bill Murray this February

The latest comedy from Barry Levinson heads to Blu-ray next year.

In an early announcement to retailers, Universal says 'Rock the Kasbah' on Blu-ray on February 2.

Rock the Kasbah is the story of Richie Lanz, a rock manager with a golden ear and a taste for talent, who has seen better times. When he takes his last remaining client on a USO tour of Afghanistan, she gets cold feet and leaves him penniless and without his passport in Kabul. While trying to find his way home, Richie befriends a band of misfits and discovers a young girl with an extraordinary voice. Against all odds, Richie will take his last shot at creating an unlikely superstar.

The Blu-ray will feature 1080p video, lossless 5.1 audio, and supplements will include: Richie Lanz: The Man and the Music and Bill Murray Rocks.

You can find the latest specs for 'Rock the Kasbah' linked from our Blu-ray Release Schedule, where it is indexed under February 2. 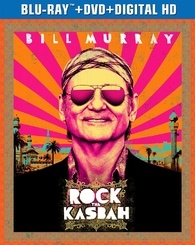