Blu-ray Will Be Taking Out Stephen Daldrey's 'Trash' in November

In an early announcement to retailers, Universal is working on 'Trash' for Blu-ray on November 17.

When three trash-picking boys from Rio's slums find a wallet amongst the daily detritus of their local dump, little do they imagine that their lives are about to change forever. But when the local police show up, offering a handsome reward for the wallet's return, the boys realize that what they've found must be important.

You can find the latest specs for 'Trash' linked from our Blu-ray Release Schedule, where it is indexed under November 17. 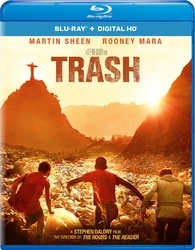