Director Kevin Macdonald's submarine thriller is coming to Blu-ray in 2015, and you can pre-order the movie here.

In an early announcement to retailers, Universal is preparing ''Black Sea' for Blu-ray in the near future.

Jude Law stars in a suspenseful adventure about a rogue submarine captain who pulls together a misfit crew to go after a sunken treasure rumored to be lost in the depths of the Black Sea. As greed and desperation take control onboard their claustrophobic vessel, the increasing uncertainty of the mission causes the men to turn on each other to fight for their own survival.

You can find the latest specs for 'Black Sea' linked from our Blu-ray Release Schedule, where it's indexed under PENDING. 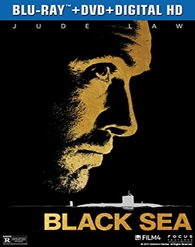 Discs mentioned in this article: (Click for specs and reviews)
Black Sea (Blu-ray)