The boxing drama based on a true story is headed for a Blu-ray in February.

In an early announcement to retailers, Universal is working on 'Bleed For This' for Blu-ray on February 14.

Miles Teller ('Whiplash') stars as Vinny "The Pazmanian Devil" Pazienza, a local boxer from Rhode Island who shot to stardom after winning two world title fights. After a near-fatal car accident leaves Vinny with a severed spine, he is told he may never walk again. Against doctor's orders, renowned trainer Kevin Rooney (Aaron Eckhart, 'The Dark Knight') agrees to help Vinny return to the ring in just a year after the accident for what could be the last fight of his life.

The combo pack will feature 1080p video, lossless 5.1 audio, and supplements include: Inspired by a Legend; An Authentic World; and Deleted Scenes.

You can find the latest specs for 'Bleed For This' linked from our Blu-ray Release Schedule, where it is indexed under February 14. 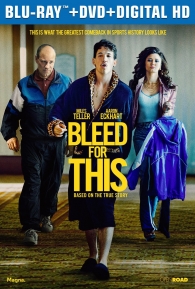