Another dog-gone adventure will drool all over Blu-ray in October.

In an early announcement to retailers, Universal is working on 'Beethoven's Treasure Tail' for Blu-ray on October 28.

Get ready to howl with laughter in this all-new family comedy starring America's favorite St. Bernard, the one and only Beethoven! After a doggone disaster of a movie shoot, the big-hearted pooch and his trainer, Eddie (Jonathan Silverman, Beethoven's Big Break), are heading home when they get stranded in a small coastal village. When Beethoven befriends a local boy (Bretton Manley, Ted), he helps him find a pirate map to lost treasure and together they em-bark on an adventure that brings the whole town together. Co-starring Morgan Fairchild (Flamingo Road), Kristy Swanson (Buffy the Vampire Slayer), and Jeffrey Combs (Re-Animator), it's a heartwarming "tail" about finding fun wherever your nose leads you.

The combo pack will feature 1080p video, lossless 5.1 audio, and no supplements have been revealed.

You can find the latest specs for 'Beethoven's Treasure Tail' linked from our Blu-ray Release Schedule, where it's indexed under October 28. 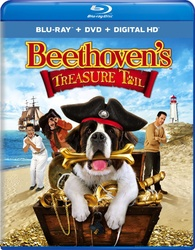