In an early announcement to retailers, Universal is preparing 'Bad Moms' for Blu-ray on November 1.

In this outrageous comedy from the writers of 'The Hangover,' Amy (Mila Kunis) has a seemingly perfect life - a great marriage, over-achieving kids, beautiful home and a career. However she's over-worked, over-committed and exhausted to the point that she's about to snap. Fed up, she joins forces with two other over-stressed moms (Kristen Bell and Kathryn Hahn) on a quest to liberate themselves from conventional responsibilities – going on a wild, un-mom-like binge of long overdue freedom, fun and self-indulgence – putting them on a collision course with PTA Queen Bee Gwendolyn (Christina Applegate) and her clique of devoted perfect moms (Jada Pinkett Smith and Annie Mumolo).

The combo pack will feature 1080p video, lossless 5.1 audio, and supplements include a gag reel and interviews.

You can find the latest specs for 'Bad Moms' linked from our Blu-ray Release Schedule, where it is indexed under November 1. 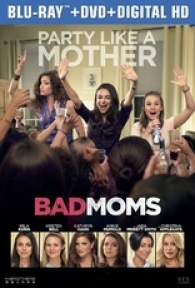