'Back to the Future Trilogy: 30th Anniversary Edition' Bound for Blu-ray

Robert Zemeckis'classic trilogy will be available in two new Blu-ray editions this October.

In an early announcement to retailers, Universal will be releasing 'Back to the Future Trilogy: 30th Anniversary Edition' on Blu-ray on October 20.

Experience the future all over again with the Back to the Future 30th Anniversary Trilogy! Join Marty McFly (Michael J. Fox), Doc Brown (Christopher Lloyd) and a time traveling DeLorean for the adventure of a lifetime as they travel to the past, present and future, setting off a time-shattering chain reaction that disrupts the space time continuum! From filmmakers Steven Spielberg, Robert Zemeckis and Bob Gale, this unforgettable collection features hours of bonus features and is an unrivaled trilogy that stands the test of time.

The set will feature 1080p video, lossless 5.1 audio, and supplements include: All New Original Shorts: Including Doc Brown Saves the World!, starring Christopher Lloyd; OUTATIME: Restoring the DeLorean: An inside look at the 2012 restoration of the most iconic car in film history; Looking Back to the Future: A 9-part retrospective documentary from 2009 on the trilogy's legacy; Back to the Future: The Animated Series: 2 episodes ("Brothers" and "Mac the Black") from the 1991 series featuring live action segments with Christopher Lloyd as Doc Brown; Tales from the Future 6-Part Documentary; The Physics of Back to the Future; Deleted Scenes; Michael J. Fox Q&A; Eight Archival Featurettes; Behind the Scenes Footage; Music Videos; Audio Commentaries; and Back to the Future: The Ride.

'Back to the Future: The Complete Adventures' will be available on the same date and will add the Complete Animated series on DVD, a 64-page book, and limited edition Flux Capacitor packaging. 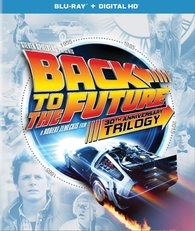 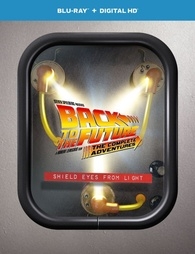