Ron Howard's 1995 Best Picture nominee has been remastered and will be getting an updated Blu-ray in June.

In an early announcement to retailers, Universal Studios has revealed 'Apollo 13: 20th Anniversary Edition' will arrive on Blu-ray on June 2.

It had been less than a year since man first walked on the moon, but as far as the American public was concerned, Apollo 13 was just another "routine" space flight- until these words pierced the immense void of space: "Houston, we have a problem." Stranded 205,000 miles from Earth in a crippled spacecraft, astronauts Jim Lovell, Fred Haise and Jack Swigert fight a desperate battle to survive. Meanwhile, at Mission Control, astronaut Ken Mattingly, flight director Gene Kranz and a heroic ground crew race against time-and the odds- to bring them home.

The film has been Newly restored and remastered from high resolution 35mm original film elements and Blu-ray supplements will include: Feature Commentaries with Director Ron Howard and Jim and Marilyn Lovell, Apollo 13: Twenty Years Later, Lost Moon: The Triumph of Apollo 13, Conquering Space: The Moon and Beyond, Lucky 13: The Astronaut's Story, Theatrical Trailer, U-Control: The Apollo Era, and U-Control: Tech-Splanations.

You can find the latest specs for 'Apollo 13: 20th Anniversary Edition' linked from our Blu-ray Release Schedule, where it is indexed under June 2. 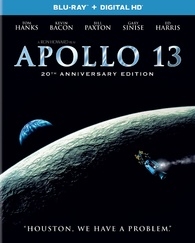