Angelo Pizzo's 'My All-American' Dated and Detailed for Blu-ray

The inspiring true story from the acclaimed writer of 'Hoosiers' and 'Rudy' heads to Blu-ray this February.

In an early announcement to retailers, Universal Studios says 'My All-American' will arrive on Blu-ray on February 23.

An unlikely football hero faces unexpected challenges with grit and grace in My All American , the true story of Freddie Steinmark. Although deemed too small as an athlete, Freddie (Finn Wittrock – The Big Short, "American Horror Story") dreams of playing football and brings a fight to the game that is noticed by legendary coach Darrell Royal (Aaron Eckhart – The Dark Knight, Olympus Has Fallen), leading to a scholarship to play college football. With dedication and grueling practices, a victorious season is within reach, but Freddie then receives a shocking diagnosis and discovers what it truly means to have the heart of a champion.

The Blu-ray will feature 1080p video, lossless 5.1 audio, and supplements include: Spirit of Freddie Steinmark – Learn how the story of the true life hero who inspired the film was brought to the big screen and A Look Inside – A behind the scenes look at the film featuring interviews with Aaron Eckhart, Finn Wittrock, and writer/director Angelo Pizzo.

You can find the latest specs for 'My All-American' linked from our Blu-ray Release Schedule, where it is indexed under February 23. 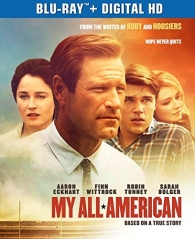