The film arriving on Blu-ray at the end of March has been fully detailed.

Academy Award winner Angelina Jolie directs and produces this epic drama that follows the incredible life of Olympian and war hero Louis "Louie" Zamperini (Jack O'Connell) who, along with two other crewmen, survived on a raft for 47 days after a near-fatal plane crash in WWII – only to be caught by the Japanese navy and sent to a prisoner-of-war camp. Adapted from Laura Hillenbrand's ("Seabiscuit: An American Legend") enormously popular book, it's the inspiring true story about the resilient power of the human spirit.

The Blu-ray will feature 1080p video, a lossless 5.1 soundtrack, and supplements include: Inside Unbroken, The Real Louis Zamperini, Cast and Crew Concert Featuring Miyavi, Prison Camp Theater: Cinderella, and Louis' Path to Forgiveness.

You can find the latest specs for 'Unbroken' linked from our Blu-ray Release Schedule, where it's indexed under March 24. 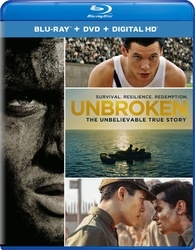