The romantic drama starring Angelina Jolie and Brad Pitt is headed for Blu-ray in July.

In an early announcement to retailers, Universal says 'By the Sea' will arrive on Blu-ray on July 5.

Written, directed and produced by Academy Award® winner Angelina Jolie Pitt, By the Sea follows an American writer named Roland (Brad Pitt) and his wife, Vanessa (Angelina Jolie Pitt), who arrive in a tranquil and picturesque seaside resort in 1970s France, their marriage in apparent crisis. As they spend time with fellow travelers, including young newlyweds and village locals, the couple begins to come to terms with unresolved issues in their own lives.

The Blu-ray will feature 1080p video, lossless 5.1 audio, and supplements include: Deleted Scenes; Gena Rowlands: An Inspiration; and Making By the Sea.

You can find the latest specs for 'By the Sea' linked from our Blu-ray Release Schedule, where it is indexed under July 5. 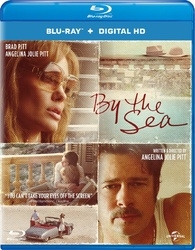