In an early announcement to retailers, Universal is set to release 'Good Kill' at the start of September.

A Las Vegas-based fighter pilot turned drone pilot fights the Taliban by remote control for 12 hours a day, then goes home to the suburbs and feuds with his wife and kids for the other 12. But the pilot is starting to question the mission. Is he creating more terrorists than he's killing? Is he fighting a war without end.

You can find the latest specs for 'Good Kill' linked from our Blu-ray Release Schedule, where it is indexed under September 1st. 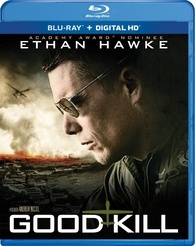