The science fiction thriller will be available on home video in May.

In an early announcement to retailers, Universal Studios says 'Mindgamers' will be available on May 2.

Starring Sam Neill (Jurassic Park) and Tom Payne (The Walking Dead), MindGamers takes the mind-bending thriller to the next level. A group of brilliant young students create a wireless neural network, linking multiple minds via a quantum computer. Capable of transferring motor skills from one brain to another, they have brought into existence the first shareware for human motor skills. They freely spread this technology, believing it to be a first step towards a new equality and intellectual freedom. But they soon discover that they themselves are part of a much greater and more sinister experiment, as dark forces emerge that threaten to subvert this technology into a means of mass-control.

The release will feature 1080p video, lossless 5.1 audio, and supplements include The Making of Mindgamers.

You can find the latest specs for 'Mindgamers' linked from our Blu-ray Release Schedule, where it is indexed under May 2. 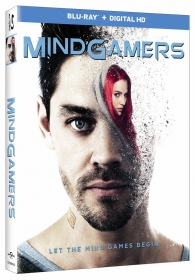