The 10th anniversary musical celebration will arrive on Blu-ray in November. You can pre-order the disc here.

In an early announcement to retailers, Universal is preparing 'Andre Rieu: Love in Venice - The 10th Anniversary Concert' for Blu-ray on November 10.

The Vrijthof concerts have been going for ten years! This anniversary was all the excuse André Rieu needed to make things extra festive and put on a fantastic, unforgettable anniversary concert. For this tenth concert series he had the Vrijthof square specially decorated in Venetian style, complete with a Doge’s Palace, Rialto Bridge, a fabulous Italian fountain and a colourful Venetian masquerade. It was a party from the start, with André and the entire Johann Strauss Orchestra riding into the Vrijthof on Vespas, in a colourful procession accompanied by the sounds of the Italian hit Azzurro, loud hooting and heart-warming applause from the whole audience.  'Love in Venice' is an evening full of wonderful Italian music, world hits like Funiculi funicula, Tiritomba and Vieni sul mar and fabulous operatic arias. For the occasion of this anniversary, the Italian singer Rocco Granata came to sing his world hit Marina.

Specs and supplements have not been detailed yet, but suggested list price for the Blu-ray is $24.98.

You can find the latest specs for 'Andre Rieu: Love in Venice - The 10th Anniversary Concert' linked from our Blu-ray Release Schedule, where it's indexed under November 10. 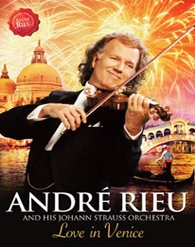 Discs mentioned in this article: (Click for specs and reviews)
Andre Rieu: Love in Venice - The 10th Anniversary Concert (Blu-ray)