The latest entry in the 'American Girl' series will hit Blu-ray in June, and you can pre-order the disc now.

In an early announcement to retailers, Universal is preparing 'An American Girl: Grace Stirs Up Success' for Blu-ray on June 23.

Grace has a real talent for baking and a passion for making delicious dreams come true. When her mom announces a trip to visit relatives in Paris, Grace isn't so sure about leaving her friends and their cupcake business. That is, until she discovers she'll get to work with her uncle and cousin in a real French pastry shop! But nothing goes as planned and her attempts to help out end in disaster. Grace is determined to make things better and with some help from her family and a little pup named Bonbon, she turns her vacation around. But when Grace returns home, she discovers a new problem--her grandparents' bakery is in trouble! With their dreams on the line, can Grace find the winning recipe for success?

Supplements have not been detailed yet, but the Blu-rayDVD//Digital HD combo pack will feature 1080p video and a DTS-HD MA 5.1 soundtrack.

You can find the latest specs for 'An American Girl: Grace Stirs Up Success' linked from our Blu-ray Release Schedule, where it's indexed under June 23. 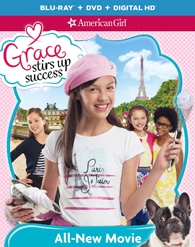 Discs mentioned in this article: (Click for specs and reviews)
An American Girl: Grace Stirs Up Success (Blu-ray)