The holiday flick from director David E. Talbert  coming to Blu-ray next year has now been detailed.

As previously reported, Universal is preparing 'Almost Christmas' for Blu-ray, and now the date has been set for February 7.

A new comedy from writer/director David E. Talbert (Baggage Claim) and producer Will Packer (Ride Along, Think Like a Man series, This Christmas), Almost Christmas tells the festive story of a beloved patriarch who asks his family for one gift this holiday season: to get along. If they can honor that wish and spend five days under the same roof without killing one another, it will be a Christmas miracle.

You can find the latest specs for 'Almost Christmas' linked from our Blu-ray Release Schedule, where it's indexed under February 7. 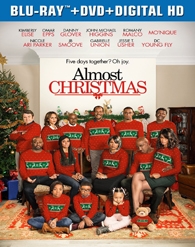