The romantic drama starring Rickman and Kate Winslet is headed for Blu-ray this August.

In an early announcement to retailers, Universal is prepping 'A Little Chaos' for Blu-ray on August 4.

Madame Sabine De Barra (Kate Winslet) is an unlikely candidate for the landscape architect of the still-to-be-completed palace of Versailles. She has little time for the classical ordered designs of the man who hires her; the famous architect Le Notre (Matthias Schoenaerts). However, as she works on her creation, she finds herself drawn to the enigmatic Le Notre and forced to negotiate the perilous rivalries and intricate etiquette of the court of King Louis XIV (Alan Rickman). But Sabine is made of strong stuff; her honesty and compassionate nature help to overcome both the challenges of her newfound popularity, and an unspeakable tragedy from her past, to win the favour of the Sun King and the heart of Le Notre.

You can find the latest specs for 'A Little Chaos' linked from our Blu-ray Release Schedule, where it is indexed under August 4. 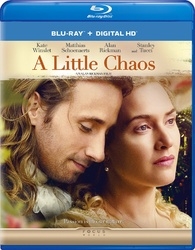