The 1995 crime drama will be available in 4K this September.

Robert De Niro, Sharon Stone and Joe Pesci star in director Martin Scorsese's riveting look at how blind ambition, white-hot passion and 24-karat greed toppled an empire. Las Vegas 1973 is the setting for this fact-based story about the Mob's multi-million dollar casino operation- where fortunes and lives were made and lost with the roll of the dice.

The release will include:

HDR10 PRESENTATION OF THE FILM

Vegas and the Mob - Featurette

You can find the latest specs for Casino - 4K Ultra HD Blu-ray linked from our 4K Blu-ray Release Schedule, where it is indexed under September 10. 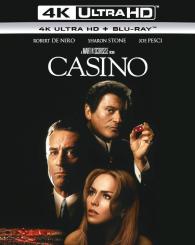