Damien Chazelle's historical drama starring Ryan Gosling as Neil Armstrong is up for pre-order at Amazon.

As previously reported, Universal's First Man is now available for pre-orders on 4K Ultra HD Blu-ray and Blu-ray. The film will be released on home video on January 22

On the heels of their six-time Academy Award-winning smash, La La Land, Oscar-winning director Damien Chazelle and star Ryan Gosling reteam for Universal Pictures’ First Man, the riveting story behind the first manned mission to the moon, focusing on Neil Armstrong and the decade leading to the historic Apollo 11 flight. A visceral and intimate account told from Armstrong’s perspective, based on the book by James R. Hansen, the film explores the triumphs and the cost—on Armstrong, his family, his colleagues and the nation itself—of one of the most dangerous missions in history.

The releases will feature Dolby Atmos (with Dolby Vision/HDR10 on the 4K UHD) and supplements include:

Shooting for the Moon – Take an intimate look at the production of First Man and the collaborative relationship between Director Damien Chazelle and Ryan Gosling.

Preparing to Launch – It's difficult to believe that First Man is the first major feature film to tell the journey to Apollo 11. Hear from Director Damien Chazelle and his cast why now is the time to tell the story of this historic event.

Giant Leap in One Small Step – A heroic character study, First Man sheds light on all the hard working individuals that got us to the moon and back.

Mission Gone Wrong – Watch as Ryan Gosling reenacts a test piloting sequence gone terribly wrong. Go behind the scenes to see how he trained to nail the landing, performing the majority of his own stunts.

Putting You In the Seat – Through the use of innovative technology, most of First Man was shot in-camera. Take an in-depth look behind the lens of this epic film.

Recreating the Moon Landing – Filmed in IMAX to show the vastness of the moon, find out all that it took to recreate the most famous moment in NASA history.

Astronaut Training – Go behind the scenes of the three day boot camp each of the actors underwent prior to filming First Man.

You can read our theatrical review here.

You can find the latest specs for First Man linked from our 4K and Blu-ray Release Schedules, where it is indexed under January 22. 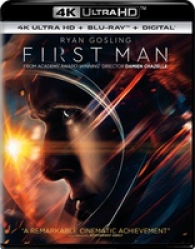 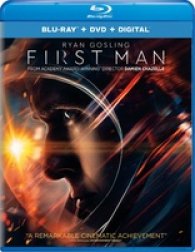