The Blu-ray of the hit comedy will attend summer school at the end of June.

In an early announcement to retailers, Troma will be releasing 'The Toxic Avenger: Part II' and 'Class of Nuke 'Em High II: Subhumanoid Meltdown' on Blu-ray on April 14.

'The Toxic Avenger: Part II' - Toxie's mean, green, and back on the screen! Melvin Junko was a nerdy 98lb weakling until he fell into a vat of toxic waste, turning him into the first ever superhuman superhero from New Jersey. This time the hideously deformed creature of superhuman size and strength takes on Tokyo. The Toxic Avenger Part II is a spectacular sequel with even more ingenious special effects, even more bizarre action, and even more unbelievably famous fight scenes. He's come a long way from Tromaville, baby!

The beloved sequel to the best-selling Toxic Avenger, known to some as "Toxie in Japan," includes a brand new introduction from director Lloyd Kaufman and many other 'Tromatic' special features! Lovingly remastered by legendary Troma filmmakers Lloyd Kaufman and Michael Herz, this Blu-Ray/DVD combo marks the film's first high-definition release in North America.

'Class of Nuke 'Em High II: Subhumanoid Meltdown' - First there was the super successful, now classic, theatrical smash hit and breakthrough blockbuster CLASS OF NUKE EM HIGH! Now, there comes the riotous sci-fi, hyper-action, big budget, ambitious sequellian comedy, Troma's CLASS OF NUKE EM HIGH PART II: SUBHUMANOID MELTDOWN! Those lovable cretins from CLASS OF NUKE EM HIGH! have graduated Summa Cum Weirdly and the once peaceful town of Tromaville is about to explode with a wave of sci-fi and special effects induced SUBHUMANOID MELTDOWN! Welcome to the Tromaville Institute of Technology, where a melt-down prone nuclear power-plant creates a hideously deformed but very positive thinking humongous mutant squirrels and obnoxious talking belly buttons with bad attitudes. In this incredibly bold adventure in gene-splicing, anarchy and terror rule the campus of Tromaville Tech as the students join forces with the subhumanoids to overthrow the insidious and hedonistic corporate slime responsible for a wave of malicious mutant meltdowns and massacres. Will peace and environmental hygiene ever be restored to the once-peaceful town of Tromaville? Find out as you enroll for the education of a lifetime in CLASS OF NUKE EM HIGH PART II: SUBHUMANOID MELTDOWN!

You can find the latest specs for 'The Toxic Avenger: Part II' and 'Class of Nuke 'Em High II: Subhumanoid Meltdown' linked from our Blu-ray Release Schedule, where they are indexed under April 14. 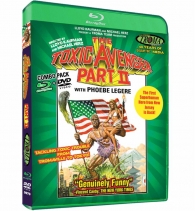 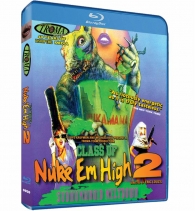