The cult flick will hit Blu-ray in April, and you can pre-order the movie here.

In an early announcement to retailers, Troma is preparing 'The Toxic Avenger: Part II' for Blu-ray on April 14.

Toxie's mean, green, and back on the screen! Melvin Junko was a nerdy 98lb weakling until he fell into a vat of toxic waste, turning him into the first ever superhuman superhero from New Jersey. This time the hideously deformed creature of superhuman size and strength takes on Tokyo. The Toxic Avenger Part II is a spectacular sequel with even more ingenious special effects, even more bizarre action, and even more unbelievably famous fight scenes. He's come a long way from Tromaville, baby!

Specs have not been detailed yet, but supplements will include: Director's commentary; At home with Toxie; A word from villainess Lisa Gaye; Toxie on Japanese TV; and Troma Trailers.

You can find the latest specs for 'The Toxic Avenger: Part II' linked from our Blu-ray Release Schedule, where it's indexed under April 14. 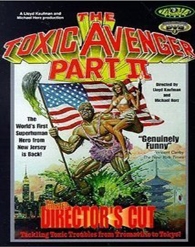 Discs mentioned in this article: (Click for specs and reviews)
The Toxic Avenger: Part II (Blu-ray)